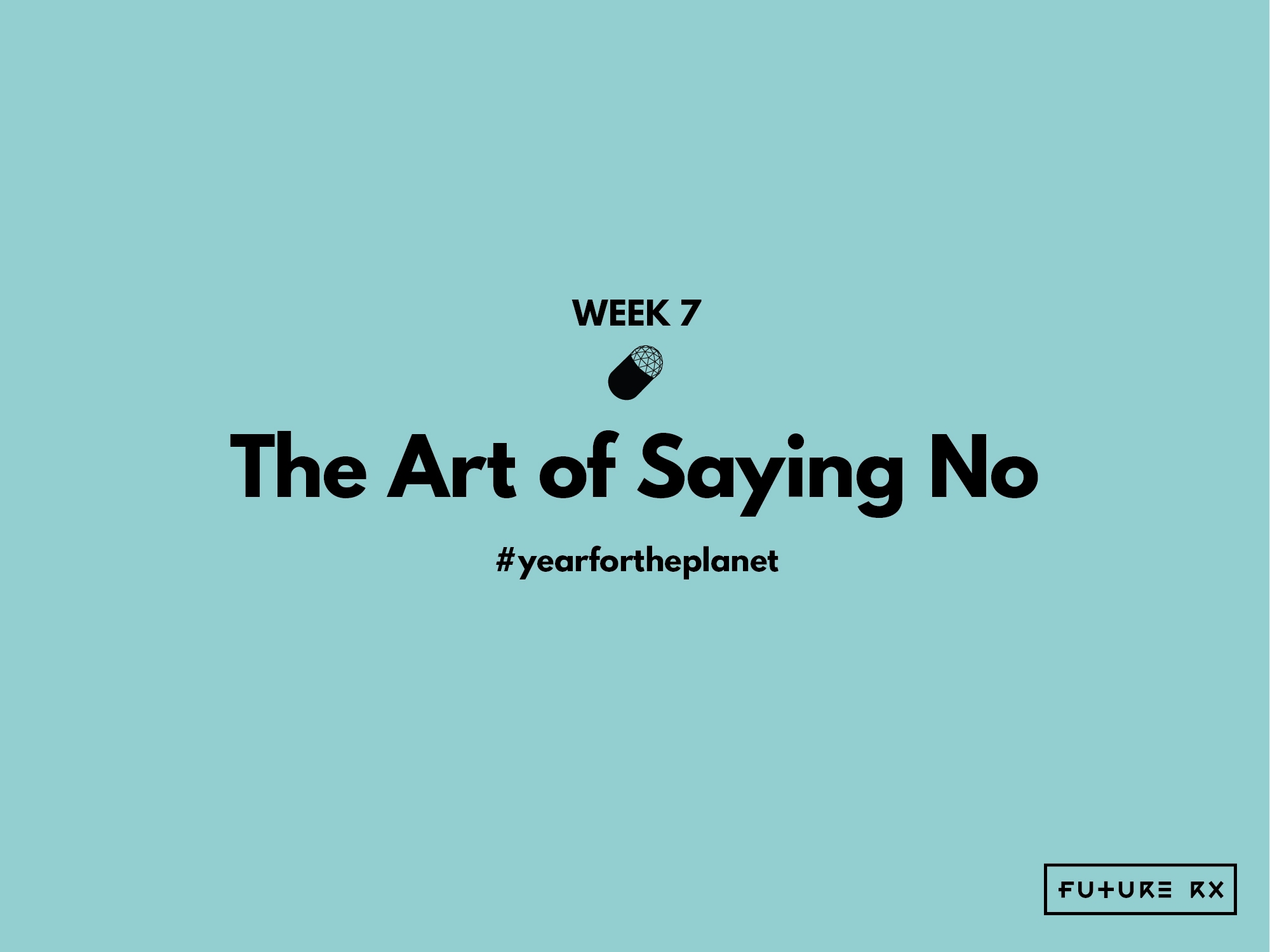 Before you can fix the world, you have to fix yourself. Year for a Planet is a personal challenge to be a better human for the planet for a whole year. This year, 2017, is where I deal with my food choices.

Since January, I’ve had to say yes to a lot of things I was uncomfortable with. This week, I reflect on how many times I’ve had to say no, and realize that in many ways this is much harder than opting in.

The main thing I’ve had to refuse is, unsurprisingly, plastic. Plastic utensils, plastic straws, plastic bags. But this is no simple matter: plastic is everywhere.  In Southeast Asia, I notice that it’s a cultural “tag” of some kind. When in the supermarket checkout, the person at the register is has an open plastic bag ready to pack your purchases with—it’s part of the job description. And I’ve noticed that many customers actually want a plastic bag; it’s proof that they did not steal the items. Drugstores even carry very small plastic bags to wrap that one capsule you bought.

In the beginning, when bringing a reusable shopping bag was the obvious choice, I would often open it at home to find some purchases still wrapped in plastic, since goods such as toiletries are usually separated from food. This means I had to adapt and insist on packing things myself.

I’ve also looked at various alternatives to plastic, such as having a reusable water bottle. But I also realized that there were times when it’s simply better not to use anything at all, such as straws. This was a glaring concern of mine since last year. When I was traveling in Bangkok, I was averaging 5 straws a day. While I love the abundance of stainless steel or glass straws available now, I don’t like having to care for too many things and owning a straw plus its cleaning brush means I will likely lose one of them. And I probably don’t really need one at least for now. They only give you premature wrinkles.

I do not wish to condemn people who use plastic. Here in the developing world, it’s the cheapest material. And because of weak infrastructure coupled with a very tropical climate, people (myself included) feel that plastic is the most efficient way to store things. But this situation has also led to a severely injured environment that harms us. (This will need a longer post and more solutions-based thinking that I’ve reserved for later this year, so I will limit this article to what I’ve done to curb my own practices.)

At first, I would simply return whatever was offered to me. Day by day, I learned that there were so many things I had to say no to—the freebies and flyers handed to me by the staff of banks or real estate companies in the mall, the free sachet of shampoo attached to another product, the plastic cups at a water cooler, the plastic stirrers near the conference coffee table, excess tape at the post office. Even my new and better choices might sometimes be wrapped in terrible ones, such as bags of spices that were wrapped in plastic twice. Twice.

So much plastic exchanged every day. And all of it for free.

Another thing I had to say no to was excess, which primarily means extra servings of food because so much of it will cause me to crash and overeat even more. This also means not depriving myself if I’ve had a really long day and I really need to eat an extra meal. And this I realized would be curbed by measuring everything when I cook, just so I can match the numbers on the recipe with whether my body felt like it was getting enough.

Refusing excess also means reducing the food that triggers it. For me, it’s carbs. I would never endorse a gluten-free diet since I do not have celiac disease, but writing as someone who can eat a whole pizza in one sitting and still be hungry, I say with not a little sadness that bread was the first thing on my black list. I also had to say goodbye to its cousin, pasta.

However, I do not believe that complete abstention from my favorite foods will lead to a harmonious relationship with the planet. If I mentally snap, these foods I abstained from will probably be the first for me to binge-eat, thus making this entire experiment a failure. So I dedicate a meal a week for me to eat these. But just that—one meal. This meant I was doubly happy having French toast this weekend. Each indulgent meal felt even more so because I could not have it every day.
How to Say No

Refusal in this age of too much of everything is a muscle we need to exercise. Here are some tips:

1. Just say no—firmly but politely. Even if it kills you.

If there was one critique I have for myself, it is to stop losing my temper so often, especially when I have to remind people three times to please not use plastic to wrap anything I buy. I can’t help it; when my taekwondo coaches yelled at me, it wasn’t out of anything else other than wanting me to do better. It taught me to embrace failure and criticism without taking anyone’s words personally. But I know that harmful systems, bad habits, and fixed mindsets are very difficult to break. Also, people in the service industry are typically not paid very well here. Being a customer with so much moral righteousness is hardly the way to change a system, so this point is a reminder mainly for myself to have some chill.

2. Prepare for the worst version of yourself.

I opt into plastic and processed food because it’s the most convenient option. And so I guard against it. Whether I like to or not, I bring a reusable bottle filled with water to remove any possibility for me to buy a plastic bottle. When I attended the wake of a friend’s father, I refused to eat anything because it meant saying yes not just to processed food, but to plastic plates and utensils. (Also, I never eat at wakes, even though it’s part of the culture here in the Philippines. It is just too unsettling for me.) I’ve made extra food in advance in case I feel lightheaded from writing too much. I never thought “energy balls” would be things I would think about outside of a video game and yet here I am.

If I want to have a feast, I schedule it so there is something to look forward to at the end of the week. I think that part of living with nature means having variety, so I’m happy to still have pizza, but in moderation and only on occasion.

While I love my new lifestyle, there are only so many sweet potatoes and overnight oats I can take each week even if they’re really delicious. In a future post, I’ll discuss the other recipes I’ve invented with the ingredients I am allowing myself.

The art of refusal is a tricky one. And yet for each time I said no, I felt that I unwittingly said yes to something else—something bigger than myself. It becomes easier each time. It’s actually quite empowering what a simple word can do to turn the tides.